Awarded at the Mid-Ohio Dressage Association (MODA) Classic I & II to the horse and rider combination with the highest average of scores at the FEI Level. Musical freestyles do not count towards this award.

​Named after Chuck Grant, a rider, trainer, and instructor who helped bring dressage to the Midwest. He grew up in Michigan, served in the U.S. Army and National Guard, and was influenced early in with Paul Stjernholm, a Dane who'd been a Major in the U.S. Cavalry; and Arthur Konyot, head of the famed European circus family. In 1947, Mr. Grant judged the first Midwest dressage show in Morton Grove, Illinois. From then on dressage grew and his involvement was critical to that growth. He trained 17 horses to Grand Prix competitive levels and felt that dressage was “for every breed.” He trained Appaloosas, Arabians, Saddlebreds, and Thoroughbreds. 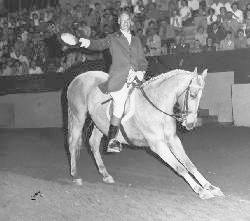 His wife Carol and two daughters all continue to train and compete on the international level. Carol Grant represented the United States in the 1982 World Equestrian Games. Grant published several articles and books, including “American Dressage,” and “Training the Haute Ecole.” He was the second inductee into the United States Dressage Federation Hall of Fame, in 1997.
Chuck Grant passed away in 1990 but his influence and legacy continues to this day. MODA is proud to honor the legacy of Chuck Grant with the Perpetual Trophy.This is awarded to the horse and rider combination with the highest average of scores at the FEI Level for the weekend. 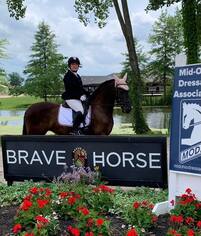 2021 Laurinda Morris
The MODA Founders Award  was first awarded at the 40th Classic in 2019, and celebrates the adult amateur MODA member with the highest single score from Classic I (Friday and Saturday), from Training Level through Fourth Level.
This award was created to honor of Laura Crawford, Sandra Burnard, Hans D. Von Bredow, and Nancy Wentz. These four came together to found Mid-Ohio Dressage Association in 1978.
The MODA Classic was kicked off the following year.